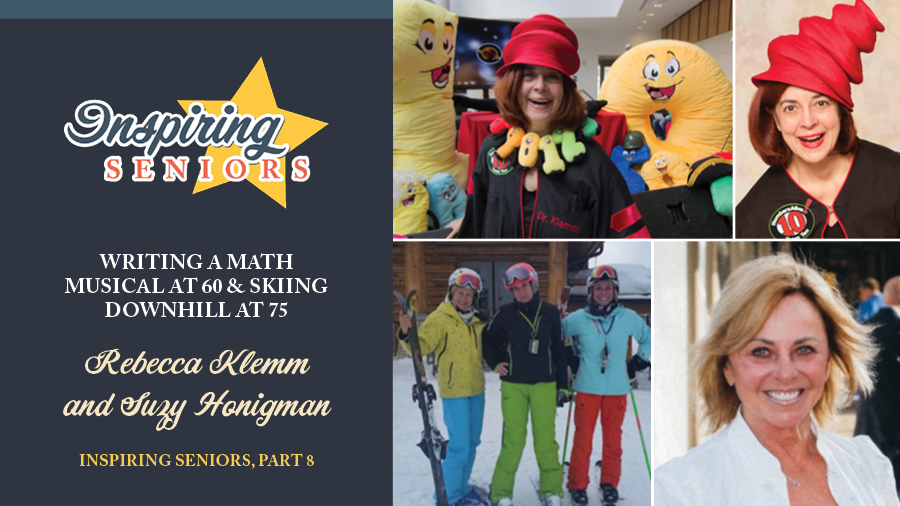 Have you ever felt like your best was yet to come? That’s exactly how today’s guest, Rebecca Klemm felt as she wrote her first musical at age 60. And Suzy Honigman, age 75, is as active as she’s ever been.

These are their stories.

“My life came full circle only after I turned 60,” says Rebecca Klemm, now 68.

Upon turning 60, she decided to write a musical – about math.

ON WRITING A MATH MUSICAL AT AGE 60

With a PhD in Statistics, and a knack for storytelling, it’s no wonder that Rebecca eventually decided to write a musical about math… right?

Well, it all started with a fascination with 3D objects. “In my early childhood, I’d create patterns and make clothing, animals, vegetables – I even gave small stuffed pickles to pregnant women at the Lane County Fairgrounds.”

That fascination would eventually lead her to create puppets for her musical.

Rebecca also loved theatre, and she worked with some of the theatres in Washington, D.C.

It turns out that the 60th year of life was her time – it was the perfect chance to blend her love and fascination of math with her creative ability to tell stories.

So, it was only perfect that she would celebrate her 60th birthday with a musical. “I had no idea it would create the circle of my life by taking me back to making the plush, fabric items of my childhood.”

Rebecca recalls a writer, who told her she had too many characters and that nobody would produce it. “He told me that the numbers should be puppets. They were flat wood puppets for the show. They’re now plush ‘friends you can count on®.’”

You can see some of Rebecca’s plush ‘friends you can count on’ in this video.

Rebecca’s musical was presented at the 2010 Capital Fringe Festival of Washington, DC. “It was only supposed to be an item crossed off my bucket list, but folks were so fascinated by the concept that they asked me to keep going!”

NumbersAlive!® was born, which is now Rebecca’s forward-thinking math educational firm. “I teach all over the world and have created meaningful math learning tools, stories, and activities. We’ve even been named one of the top k-12 social media influencers by EdWeek Market Brief!”

Another awesome perk of this new adventure? Rebecca’s new nickname is The Numbers Lady®.

“The first 60 years of my life were just the prelude to this transformational learning process,” she says.

And she’s taking that notion to heart as she continues to cross more accomplishments off her bucket list.

“I just spent two days training teachers of Syrian refugees (many who were also Syrian refugees) in Lebanon. My slides were mostly pictures, but the discussion was translated from English to Arabic. That was a bucket list goal that happened during March 2018 and will happen again,” she says.

“You are never too old to follow your passion,” she says. “Age is just a number.”

“My name is Suzy, and I am in the fourth quarter of my life,” says Suzy Honigman.

Suzy is quite literally outdoors doing something every single day, depending on the season.

“I’m an avid expert downhill skier,” she says. “I’m usually a 2-sport a day girl. If the skiing isn’t difficult, I’ll either walk or go to the gym for 3 miles on the treadmill.”

Skiing has been a lifelong hobby for Suzy, but it was never all-consuming – until now.

She began skiing in Michigan at age 20, and when she was 28, she got married and would take one or two trips to Aspen each year. At age 46, Suzy bought a condo in Aspen, and she started spending about 4 weeks per year skiing. At age 60, she moved to Park City, and she’s been skiing ever since.

“I took it up because I love the outdoors, and I’ve done and played sports both for fun and competition. I ski very aggressively,” she remarks.

In between her ski trips, Suzy fits in Pilates, golfing, hiking, fly fishing, and even outdoor concerts, which she loves. “I love outdoor concerts in the summer, and I have season tickets to the Winter Play series at the Eccles Theater in Salt Lake City!”

Suzy also loves playing pickleball and has become pretty addicted to it. She says she’s in the best shape of her life, and she attributes this to living in Park City with the mountains and an active community.

During the week, Suzy works on-call at Deer Valley Ski Resort. She also has 2 grandchildren.

ON AGING AND THE CONCEPT OF RETIREMENT

Suzy hopes to never retire – as of this past year, she feels like she’s appreciated more than ever before because of her patience. “Added patience comes with age. I truly enjoy helping people have a really good experience there,” she says.

Suzy doesn’t feel 75 at all, and she attributes that to her attitude and her desire to stay healthy. “Staying healthy and young is my real daytime job!” She consciously stays active and even dresses younger to keep herself feeling youthful.

But at the end of the day? She wouldn’t trade her age for anything.

“If I could be whatever age I wanted, I would still be 75. Of course I would prefer to have my physical body be what it was in my 40s so that I could wear the clothes and shoes that I did then, but I would never give up my mind or my knowledge and experience of the world and my friends.”