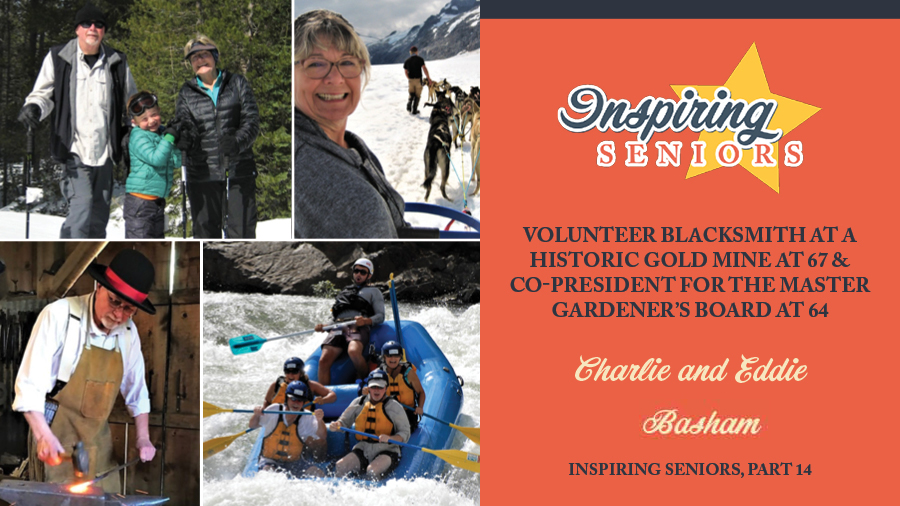 In today’s installment of the Inspiring Seniors series, we actually have a first – a husband and wife!

Charlie Basham, age 67, is retired but you’d hardly know it – we’ll learn more about his volunteer work at a local historic goldmine along with his thoughts on aging and retirement.

Eddie (Edwena) Basham, age 64, is also retired, and she’s slowly crossing things off her bucket list – and at an impressive pace!

A lifetime ago, Charlie was an art major in college. That all changed the day one of his roommates accidentally burned down their house. Afterward, buried in the ashes, Charlie found the oil painting he'd just spent six months finishing. The sight of the charred frame and burnt canvas affected him forever.

“That burnt picture did something to me. It changed my life's ambition to become an artist. I thought... 'What am I going to do in college now?’” Charlie recalls.

That prompted him to change his major to journalism. After graduation, he spent the next few decades painting pictures with words. Along the way, he also raised a family and became an accomplished freelance writer. He earned a master’s degree and also became a part time professor teaching advertising and public relations at several Southern California universities.

“My first job was with Hot Rod Magazine. Then, I moved over to Guns & Ammo Magazine. What’s funny is I’m not a car or gun person, but I have a talent for editing. I could turn a really bad story written by a grease monkey into something readable,” he says.

Charlie eventually settled in as a senior communications manager at Southern California Edison where he oversaw this large electric utility’s advertising and customer communications. “I spent 31 years there, and I had a wild and very fun career. Most days I couldn’t wait to get to work!” Charlie laughs.

And it’s true – in addition to the more normal corporate communication tasks he guided the construction of electric powered Rose Parade floats and supervised thousands of volunteer decorators each year. He created dozens of science museum exhibits and fair displays, and even managed the naming rights of the Anaheim Angels ballpark (Edison Field).

After talking to Charlie for quite some time about his career, it’s clear he had a passion for his work. And the need to be creative! There was always something new and unusual, and the creativity required for the job kept him engaged and interested. Which led me to ask one important, yet simple, question: why in the world did he retire?

“There’s a life beyond work,” says Charlie. “What really stimulated me at the utility company was the creative expressions I could make.”

So it stands to reason that if Charlie takes on new adventures that give him the ability to be creative, he can have the freedom of retirement without losing the drive of a career.

“That’s exactly what it is. I can travel and do the things I want to do, but I still find ways to express my creativity,” he says. Plus – there’s time to travel and explore!

And for Charlie, that’s the real advantage of retirement. What's more, most of his friends are retired now, too, making it a lot easier to schedule camping trips and get-togethers.

ON BEING A VOLUNTEER BLACKSMITH

Charlie volunteers as a blacksmith at a historic gold mine in Placerville, California. With an audience of tourists or students, he’ll heat horseshoes and raw metal and shape them into useful objects like bottle openers, cork screws, or salt spoons.

“I found out pretty quickly I’m not a very good blacksmith,” Charlie laughs, “but it’s been a fun and rewarding experience. Shaping hot metal gives me those same creative challenges I've always enjoyed.”

After about a half a year and several self-proclaimed "failed" art pieces, Charlie gravitated toward giving gold mine tours to the thousands of school kids who visit the park every year. “That’s one of the best rewards. When I start talking to the kids about the Gold Rush and gold mining, suddenly someone’s eyes may light up! I’ve made a connection! And I wonder where that inspiration will take them. Will it include history or geology? Maybe earth science?”

“I feel like my age gives me an advantage,” says Charlie.

He finds that he’s better able to bring wisdom to the challenges he faces. “It’s not like trivia wisdom – it’s about human nature and how things work. It’s about what you need to consider. Just narrow it to the important things you’ve seen and learned over the years.”

Charlie also notes that with age, he’s realized how important those around him really are. “I’ve found that as I get older, the most important things to me are my family and friends. They help keep me going. It’s the people in my life. It truly is!”

As far as the future goes, Charlie wants to dial back his volunteer activities for the next year or so. He plans to take a year-long leave from his duties as president of the non-profit organization that helps run the historic gold mine. He and Eddie want to do some serious international travelling. At the top of Charlie’s bucket list is to go on an archeological dig for a week or two. “That’s part of my passion for history. I’d like to get dirty, maybe unearth something meaningful and do it all for free,” he laughs.

Also, these two are training for a walking half marathon next week in Northern California. He says that their hours of training together have given them a chance to “bond” while keeping in shape.

Charlie has run 19 full marathons, but confesses his knees have finally given out from the countless miles of training. “It was a nice revelation when I realized I don’t have to run to stay in shape anymore – I can actually walk fast without hurting. And that’s important as you get older. Your body starts to change, and Eddie and I both wanted to stay flexible as best we can. We’re by no means health nuts – I love eating pizza and In-n-Out burgers. But good health is an extremely important part of a rewarding retirement,” he says.

At the end of the day, Charlie says he plans to keep busy in some way. “Here’s why,” he explains, “My father passed away before he could retire. At that moment, I vowed to retire early and enjoy all that life has to offer. I’m keeping that vow in his honor.”

Before retirement, Eddie ran her own retail store for women’s clothing. She opened four stores in Southern California, but then the stock market crashed and the economy soured.

Suddenly, Eddie had to start over. She started work at Southern California Edison supervising the Customer Service phone center team that answered calls from roughly 14 million customers. Eventually, she managed a department that oversaw the utility’s energy contracts with large commercial and industrial customers.

Charlie and Eddie met at Edison’s corporate headquarters about a dozen years ago. It was on their first date when they discovered they lived only about 100 feet from each other. She had a home on a small island in the Huntington Beach boat harbor – and his house was just across the channel. They’d seen each other’s boats in the harbor before, but never made the connection. Eventually, they fell in love and got married on the beach across the street from Charlie’s home.

“I don’t look at retirement as the end of something,” says Eddie. "It's actually the beginning of something more exciting!"

In fact, right before she retired, she was completing her MBA, which would’ve helped her advance her career at the utility.

Her thesis was on the business of opening a winery. But, by the time she’d finished that thesis, she decided she didn’t want to work that hard in retirement. “It’s takes about five years before you can get a glass of good quality wine out of grapes,” she says.

Eddie wanted to travel and have fun. With her graduate degree, she’d planned to teach online college business classes. But she says that in all honesty, she hasn’t had the time! “From volunteering to traveling to grandkids, I’m having a blast! I’ve been way too busy,” she says.

“I have to say that the skills you learn in work life, you take into retirement,” says Eddie. “I'm from the generation where we made many of our things rather than buying them.”

When her son was young, Eddie recalls making him outfits – and she found she really enjoyed sewing. But her career got in the way, and it wasn’t until retirement that she was able to revive her love for sewing and creating.

She joined the American Sewing Guild and some local quilting clubs, and she has plans to make a quilt from Charlie’s marathon t-shirts. “I’ve met a lot of interesting people in the guild, and the skills that they have… they’re sharing those with me,” she says.

Another plus of being retired? Eddie and Charlie have had time to connect. “Our relationship, since we’ve retired, has really grown. We’ve become best friends, really,” Eddie says.

ON BEING CO-PRESIDENT FOR THE MASTER GARDENER’S BOARD

Gardening was something Eddie had always wanted to do, but she never had the time. In Placerville, located in the Sierra foothills between Sacramento and Lake Tahoe, Eddie serves as co-president of the El Dorado County Master Gardener’s Board of Directors.

Six years ago, Eddie found it easy to transfer her management skills to the Master Gardener program. “You make friends with everyone, and the board positions change every year or two. The board is always looking for new people to step in. After a while, they twist your arm, and there you are,” Eddie laughs.

“I really truly enjoy my gardening,” Eddie says. “I’ll do this as long as I can.”

“When you’re younger, you worry about people judging you and looking at you expectantly. When you get older, you just don’t care as much,” Eddie laughs. “We all just want to be healthy and stay as youthful as possible."

“I asked my very southern mother on her 70th birthday, ‘How does it feel to be 70?’ And she said ‘Oh honey, I still feel 18 – until I look into the mirror,” Eddie recalls. “Now that I’m getting close to that age, I can really relate! You just don’t feel your age – until your body reminds you,” she laughs.

Eddie practices yoga, which helps her stay flexible. And the meditation aspect helps her to slow down a bit and clear her mind.

Both Eddie and Charlie work on keeping their minds and their bodies active in retirement, which keeps them feeling young.

“We’re holding hands a lot and are crossing things off our bucket lists. Something I’d like to do soon is to see the Northern Lights,” says Eddie.

In their 7 years of retirement, Eddie and Charlie have accomplished a lot.

“People ask ‘don’t you miss work?’ And I just say… no!” Eddie laughs. And who can blame her? She’s using her management skills at the Master Gardener’s Board, she’s crossing off bucket list items, and she’s becoming closer to her husband Charlie every day.

“As long as we’re feeling well, are healthy, and are having fun… it’s all good!” 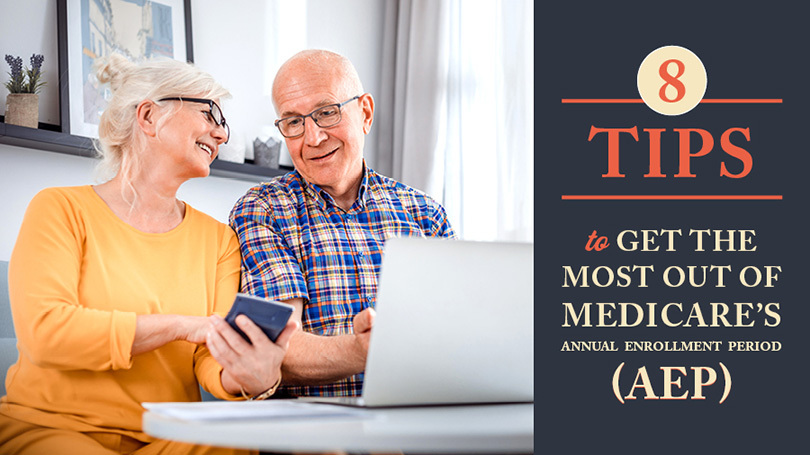 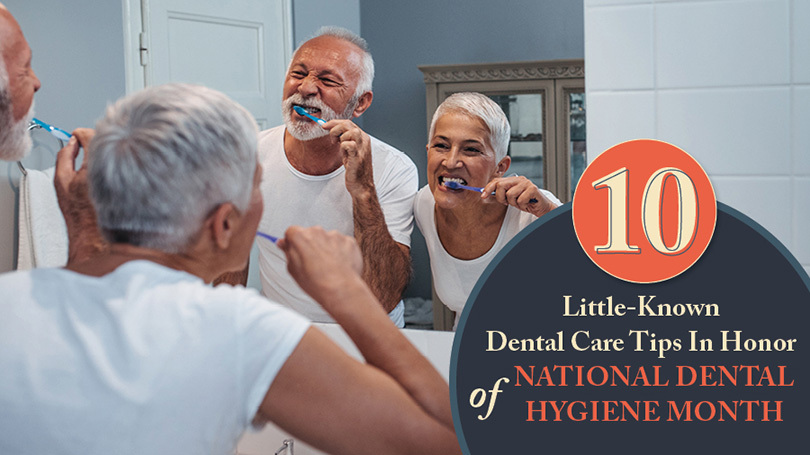 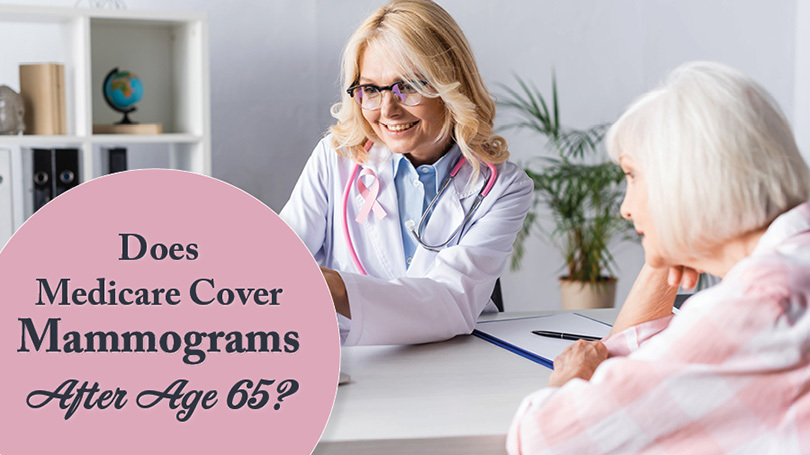 Mammograms and Medicare: What You Need to Know