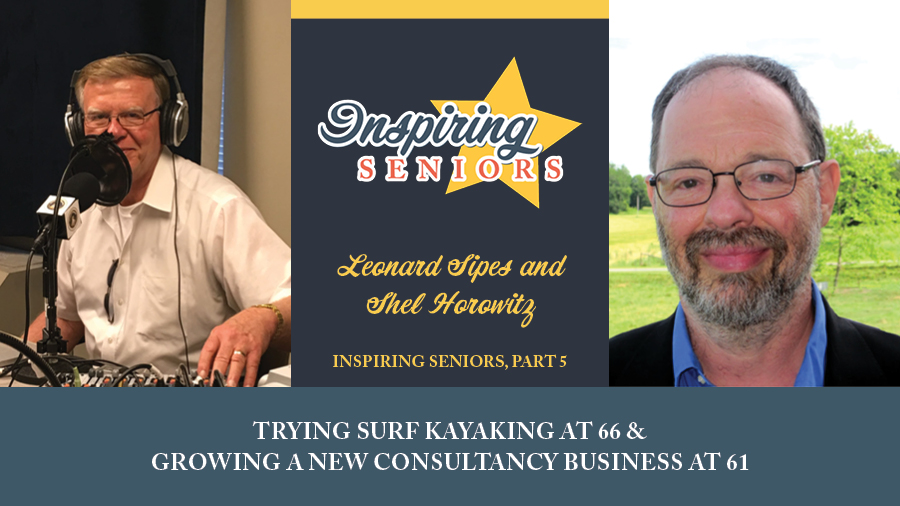 In today’s installment of the Inspiring Seniors Series, we’ve interviewed 2 men – one who is thoroughly enjoying retirement, and the other who has chosen to start a new business instead.

These are the stories of Leonard Sipes and Shel Horowitz.

Leonard Sipes, who turns 67 in May 2018, spent close to 50 years involved in the criminal justice system. He started out as a police officer, went to college, and then worked as a criminal justice spokesperson.

“My life was one of being on 24-hour-a-day call, 365 days a year. They always say that public affairs people are the last people to leave the office, and that’s true.”

Leonard’s lifestyle was pretty hectic, which is why retirement is such a blessing to him now – but he wasn’t exactly thrilled about the concept of retirement.

“I was scared to death of retirement,” says Leonard.

He felt that his identity was so closely related to his job that the thought of leaving gave him anxiety. He thrived on the adrenaline needed for the job, and while he deserved the luxury and the calmness of retirement, he couldn’t stand the thought of it.

“I had to talk to retired friends just to get up the nerve to pull the plug. They basically said I have nothing to worry about. There’s all sorts of things lined up to keep life interesting,” he says.

Leonard explains that for the first time in his life, he can be… well, selfish. “I get to do the things that I want to do. That’s been the goal of retirement.”

Since being retired, Leonard has taken that notion to heart.

ON TRYING NEW THINGS IN RETIREMENT

When we’re young, we have all summer to try new things, delve into new interests, and just relax. And for Leonard, retirement is like one long summer. All the things he had time for when he was a kid – well, he’s come full circle.

Leonard is currently taking private drumming lessons – yes, the kind of lessons any 13-year-old would take. “I used to play when I was a lot younger, but I decided that I want to get better. So I hired an instructor.”

He’s also surfing again, which he hasn’t done since he was in college. Although this time, he isn’t surfing on a surfboard. “Where I’m at in Florida… there’s a shark problem,” he laughs. “I’m trying out surf kayaking this time.”

He also runs his own website, www.crimeinamerica.net, and he writes about crime for national publications.

“It’s just about doing the things I’ve always wanted to do. It’s reading a book. It’s going on a bike ride. It’s walking on the beach. I don’t lack for things to do,” he says.

Retirement has also given him time to get to know his wife – and himself. “There are zero regrets,” he says.

ON AGE AS AN ADVANTAGE

For Leonard, the idea of starting over again and going back to his adolescent years is absolutely revolting. “Learning what I know now, getting the education, working low-income jobs, trying to watch every nickel… why would anybody ever go back to that?”

The other plus? An empty nest. “I love my kids dearly,” he laughs, “but I’m also very happy that they’re not living with us any longer.”

And even though Leonard is trying all these new things in retirement, he says it’s not that uncommon. “All of us here do similar things. I’m not unusual. Some of the people I play tennis with are in their 70s and 80s.”

“I don't have any,” says Leonard. “My material aspirations are very modest. Nevertheless, my wife and I are going on a cruise for the first time, we’ve explored St. Augustine, we’re learning about Florida history… we’re just in a position to simply ask each other: what do we want to do today? That’s an enviable place to be.”

Leonard is thoroughly enjoying what he’s doing now, and with any luck, he hopes to be doing exactly what he’s already doing for the next 20-25 years.

“To all those people who are scared to death of retirement like I was, the lesson is this: figure out what you want to do and pursue it.”

Four years ago, at age 57, Shel Horowitz finally figured out what he wanted to do when he grew up.

Since the 1980s, Shel worked as a writer. He worked on resumes, marketing copywriting for small businesses, and writing projects for authors and publishers. Over the years, he honed his skills and found himself doing more consulting than copywriting.

But something changed for Shel – something caused him to shift his thinking and consider how he could use his skills for something… bigger. Something more meaningful.

ON TAKING HIS BUSINESS IN A NEW DIRECTION AT 57

“I live directly abutting a state park with a mountain. A local developer decided that the next mountain was the perfect place to put a luxury housing development,” he recalls.

Shel wasn’t too keen on that idea, so he put together a movement. The organization he founded was able to routinely rally up 400 people to go to the public hearings, got well over 1,000 signatures on a petition, and finally, won – in just 13 months (Shel expected it to take five years).

That movement would be the start of a major shift for Shel. “After that, I just started percolating about how I could put more of my values into the work I was doing.”

And that thought process, along with some help from his business coach, led Shel to shift his own business direction and become a profitability consultant for green and social entrepreneurship businesses.

“Green is now a mainstream position. That certainly wasn’t always true – not even in 2003, when I published the first of my several books in this area,” Shel says.

Right now, Shel is working with a client who sells solar-powered LED lamps that fold up and fit in your pocket.

Shel is currently helping her to pursue sponsorships and government partnerships for disaster relief. “I wrote a letter to the mayor of San Juan, Puerto Rico showing her willingness to get some lights into the areas that still don’t have power after the hurricane.”

He also just sent off a letter to the sustainability person at a major international beverage company offering them the first sponsorship opportunity.

Shel also has a client from Canada who has two products – a software tool for managing green buildings and a social network for those who live in them.

These clients often find Shel from his presentations and his 10 books, several of which have been award-winners or best-sellers.

Shel’s work as a consultant is actually what his post-retirement plan was – but it’s now becoming a sustainable business in its own right.

“I have fairly low economic needs. My house is paid off. I have some room to play with this in order to make it financially viable. I can take that time,” he says.

But overall? This line of work doesn’t necessary feel like work at all. “I might cut back in the future, but I probably won’t retire as long as my health holds up. It’s so rewarding personally to make this kind of impact.”

ON AGE AS AN ADVANTAGE

There’s no doubt that Shel’s years of writing has helped him hone in on his skills that he uses now, but age has a greater advantage to him than that.

“Age has given me patience. In my 20s, I was not at all patient. But I’ve learned that the wheels turn very, very slowly. But they do turn.”

In his 20s, Shel was an organizer for the Gray Panthers, a multi-generational advocacy network that confronts agism, among other social issues. “Because of that experience, I feel that I’ve always had great role models for growing older,” he says.

Recently, Shel went to his friend’s 100th birthday party. “She was making a speech for her charity, and she had 300 people in the room, yet she was still exchanging one-liners that were clearly not rehearsed,” he says.

“That’s what I want to be like at that age.”