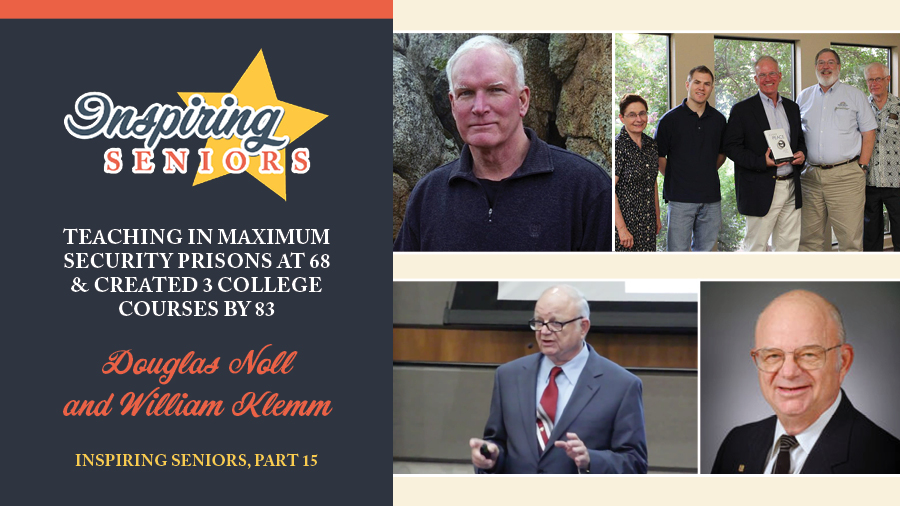 Have you ever wondered what it would be like teaching women the art of peacemaking in one of the most violent prisons in the world? What about creating 3 college courses in your 80s?

Wonder no more – hear these incredible stories from guests Douglas Noll and William Klemm in today’s installment of the Inspiring Seniors series.

After 20 years of being a very successful lawyer, Doug Noll decided to make a change. He went back to school, got his master’s degree in peacemaking and conflict studies, and left the practice of law to become a peacemaker and mediator.

In 2009, a colleague of Doug’s, Laurel Kaufer, called him about a woman who was serving a life sentence without the possibility of parole. She was in the largest, most violent women’s prison in the world at the time.

Laurel was asking if he’d be willing to teach the “lifers” – women serving life sentences – to become peacemakers so that something could be done about stopping the violence.

What happened next would shape the next decade of Doug’s life.

ON TEACHING IN MAXIMUM SECURITY PRISONS

Since Doug lived somewhat close to Valley State Prison for Women – it has since been repurposed as a men’s prison – and he happened to be specialist in mediation and peacemaking, he decided this was something he needed to do.

It took him 6 months to get permission to move forward, and he started with his first 15 women. It was all pro-bono work, and by the time they were halfway through the first session, there were 200 women in the prison who wanted training.

“It’s a very rigorous, year-long curriculum that shows the lifers and long-termers exactly what it takes to be a powerful peacemaker and mediator so they can stop the violence around them,” explains Doug.

Over the next few years, they’d trained over 200 women, and 15 of those women were trained to be trainers.

Then, the prison was repurposed into a men’s prison, and the women were transferred to other prisons across the state of California. Doug and Laurel followed those women to continue the training.

Then, Doug started getting phone calls from the warden at Valley State Prison asking if he’d bring Prison of Peace – the name of the program – back in order to teach and train the men there.

“We had to say no a lot, because we weren’t getting paid, and this was taking a lot of our time, but we eventually said yes. What’s amazing is the exact same thing happened with the men that had happened with the women,” says Doug.

Now, Doug and his colleagues have trained over 1,000 men. That finally led to some grants that has allowed Prison of Peace to expand to over 11 California prisons, and 4 prisons in Greece. More expansion will happening in Connecticut soon.

“These women have killed people. Absolutely. But they self-select into our project. I think a lot of them feel deep shame, and they’ve reflected on their lives. They recognize that they’ve really screwed up big time. But this isn’t a self-help program – we tell the women that it’s not about fixing you, it’s about helping others,” says Doug.

Doug continues to explain that the program’s tagline is ‘moving from a life sentence to a life of service,’ and that resonates with the inmates. They see a way of getting some reparation for the bad things they’ve done by spending the rest of their lives serving those around them.

“I have to say that in the beginning, it was intimidating going into the prison. But today, it’s no big deal. It’s honestly more of a hassle dealing with the bureaucracy of the prison than dealing with security. In all the years of doing this, never even once have we had a whiff of any type of problem,” Doug says.

He explains that the women because some loyal to the team that if anyone outside the group were to even look at them funny, they’d be taken down by the inmates. “They’re intensely loyal and protective,” Doug says.

ON THE THOUGHT OF RETIREMENT

“I suppose that if you did the same thing for 40 years, you clocked in and clocked out every day, and the work is maybe not that meaningful and maybe even boring – getting out of that job is probably a nice thing. But if you’re somebody like myself who’s self-employed, who does interesting things… well, that’s just what my life is. Saying I’m going to retire is like saying I’m going to die. It’s just a different perspective,” Doug explains.

For Doug, his work is synonymous with his life. It’s who he is. As long as he’s able to continue his mission, he won’t stop.

Doug has a lot of experiences. He’s seen a lot, done a lot, and made a lot of mistakes, and that gives him wisdom he didn’t have even 20 years ago.

“I’ve seen some of these cycles. Stock market cycles, inflationary cycles, political cycles – you see the good and the bad over a long period of time, and you realize that right now is just part of a cycle,” Doug explains.

Things will get better, worse, or they’ll change directions. Doug says that he’s able to let things happen without letting them bother him with this kind of perspective on life.

Something else Doug has learned? Money isn’t everything. In fact, it’s not really that important at all.

“When I was a trial lawyer, I made a lot of money. But now, I realize that financial security is important, but having a ton of money is sort of stupid. It just doesn't mean much. I mean, I have a comfortable life, and I live modestly. But the real satisfaction in life comes from serving people, not your bank account,” Doug says.

Over time, Doug has seen that people can aspire to certain things, and once they get there, they ask themselves, “Is this all there is?” The goal isn’t what’s important – it’s the journey.

And Doug’s journey is all about passing off his wisdom to those who are interested in becoming peacemakers, leaders, and effective human beings. “I want to teach other people what I do. I want to change humanity.”

You can watch a video about Doug’s work in the Prison of Peace program here:

Seventeen years ago, Dr. William Klemm retired from Texas A&M. However, he continues working part-time as a senior professor of neuroscience. In his “retirement,” William has created three college courses that he teaches today.

William was active in the FFA – the Future Farmers of America – and he loved agricultural-type activities. He eventually got interested in veterinary school. He became a veterinarian, but after he practiced for a while, he realized it wasn’t really what he wanted to do.

He then found what would be his lifelong passion for medical research. He got his PhD in biology, and he’s been an academic ever since. He spent 3 years teaching at Iowa State, and it’s been 54 years now at Texas A&M.

Since being retired, William has developed 3 college courses: Core Ideas in Neuroscience, Neuroscience and Religion, and History of Neuroscience. “The university is creating a Neuroscience major, so I’m trying to help them complete that,” William says.

Creating a college course is a massive endeavor, and William explains that the History of Neuroscience course will only be 1 credit hour, and it will take him about a year to complete.

“The work it takes to develop a course often depends on the subject matter. Sometimes, you just have to gather instructional material and make quizzes. In other cases, you have to structure interactive activities for the students and things of that nature,” William explains.

The Neuroscience and Religion course is an essay course, so the students write research papers. The structure of that course is quite different from others.

William is currently working on a book about Neuroscience and Religion, based on his research while creating the course.

I asked him to explain what the course and his upcoming book are about, and William gave the example of abortion.

“If you understood what’s happening in a developing fetus from a neuroscience perspective, you’d be hard-pressed to support abortion in a late-term fetus. There’s lots of scientific evidence that a late-term fetus is conscious,” he explains.

The concept William is after is to use science to inform religion – “I want to help people develop a more mature faith, which includes finding ways to incorporate science into religion,” he explains.

You can hear more about this conflict between religion and science in his recent TEDx Talk:

ON RETIREMENT AND AGING

While William is technically retired, he thinks he’s more productive now than he’s ever been. “I don’t have to deal with all these committee meetings and paperwork and things that really interfere with productivity,” he says. This was all mandatory when he was working 8-5, but now that he’s part-time, he’s not required to be a part of the “academic bureaucracy” so-to-speak.

William goes on to say, “If you want to age well, I think you should delay retirement for as long as you can. At least do what I did and retire, then go back to work part-time. It keeps you stimulated and gives you things to do. In many ways, it counteracts the problems that occur as you get older.”

William explains that there’s a good bit of research showing that mental stimulation helps you age well – not to mention fighting off illness and disease.

William’s wife has passed away, and he explains that he still misses her and that he was surprised at how much life changed when he became a widower. “The realization that I had so much time on my hands after she passed occurred shortly after her death – I knew that this would be a problem, but it’s a problem for all widows and widowers. Everyone has to try to stay active. For elderly people, it can be really lonely. So I do have to make more of an effort to be engaged socially and to be active, which I think I have.”

William also goes to the gym, and he says he never sees people his age there – the oldest he’s seen is about 70. “I’m starting to feel better, but I think I look better too!” he laughs.

As far as dating goes, William isn’t too optimistic about it. “I wasn’t interested in dating, but I did make one attempt at it. I realized that it wasn’t going to work. I just haven’t found anybody else that I’m attracted to,” he says.

As William continues his research, he’ll have the gratification that his legacy is living on as the next generation starts being awed and amazed by all that science has to offer.