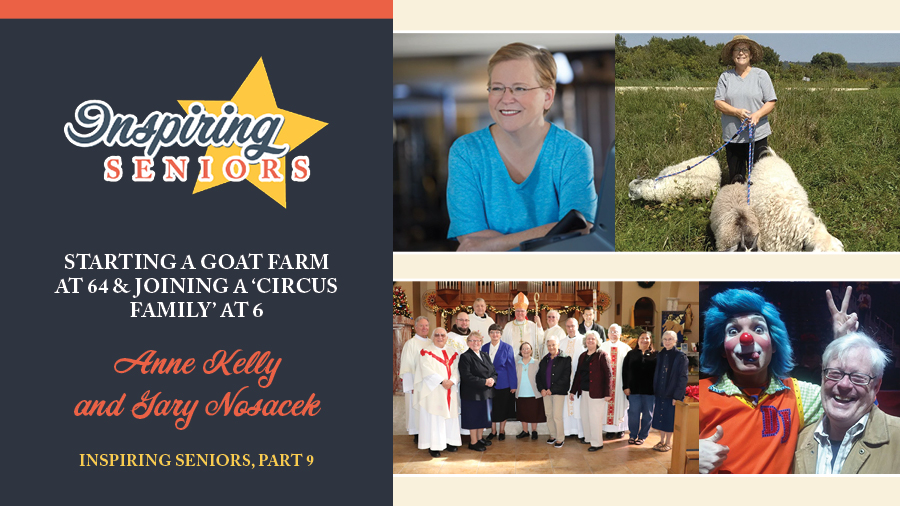 At the age of 65, Anne is working on growing her rebranded plus-sized apparel company, JunoActive – and she’s just started up a hobby goat farm. And at the age of 63, Gary Nosacek is travelling all over the world doing extraordinary things – including being welcomed into a circus family. Yes, a circus family.

These are Anne and Gary’s stories.

Anne Kelly, age 65, is the President and Founder of plus-size activewear and swimwear retailer, JunoActive.

JunoActive started out as a catalog in 1995 – it was actually the brand Junonia, which may be familiar to you.

Junonia was rebranded as JunoActive in 2012, and the apparel company is for plus-sized women with a focus on activewear and swimwear.

Mid-career, Anne had the chance to go to business school. When she came back, she gave herself 3 months in order to start a business or she’d go find a “real” job somewhere.

So, she put together a few business plans, and this is the one that stuck.

Right out of the gate, Anne started making her own products. She knew the good stuff her husband, a marathon runner, was able to get, and it just wasn’t available for plus sized women.

“I have a strong belief that everyone deserves to be active – people of all sizes and ages. My mother is 93, and even though she has arthritis, she’s extremely active. Being active adds to life so much,” Anne says.

Like any small business, JunoActive has seen its ups and downs over the years. “Frankly, we’re just turning it around right now under a new concept, JunoActive. We have some building to do, and that’s very exciting for an entrepreneur.”

ON STARTING A HOBBY GOAT FARM

Just last year, Anne decided to start up a hobby goat farm. It’s small – only 3 goats at the moment – but Anne just went to see the woman who sold her the goats, and she’s picked out two more goats that she’ll get in late May.

“She’s breeding a special kind of goat that doesn’t have to be milked everyday. I just get to enjoy the goats!” Anne says.

Anne has always had this goat farm dream, and after a long search, she was able to find the perfect place in Wisconsin.

“It’s the weirdest thing – I don't have any idea where this dream came from. I’ve always loved animals, and I just find that being with animals is like a mini vacation for me.”

Anne also enjoys the fact that taking care of the goats keeps her active. “I’m not the type of person who enjoys working out in the gym everyday – I do a bootcamp workout twice a week, but being on the farm is a way to stay moving.”

And in case you were wondering what exactly happens on a goat farm – we wondered, too! – Anne explains that it’s a lot of little things. Trimming the goat hooves, checking on them, housekeeping at the farm, and even teaching the goats tricks!

“Teaching them tricks is not as easy as it sounds,” Anne laughs. “Farm work is fun, but it also works up a good sweat and gets your heart pumping. There’s always something to do.”

Anne continues, “The key for anyone over 60 who wants to be active is to find something you enjoy doing so that you feel both mentally fulfilled and physically well at the same time.”

“First of all, I don’t think I feel my age,” Anne says, “but with age comes a certain perspective. A certain lack of fear like you’ve been there before, so when things happen, you aren’t as stressed out by it.”

Anne says that age has also given her more patience, even though she’s naturally a bit impatient.

Another perk that comes with age is the pleasure of seeing younger individuals go through their own journeys. “It’s just so fun to see them in their careers and to watch things take hold.”

As far as her business goes, Anne sees the perks that come with all ages. “You absolutely need a mix of young and old. The younger ones can help with the things I’m not good at, like social media. But it’s always good to have a little gray hair in a business.”

Anne isn’t ready to walk away from JunoActive. She’s right in the middle of building the business, and the thought of retiring in the midst of such a busy time just doesn’t make sense.

On the other hand, Anne still looks ahead to the future. A couple years ago, she got a certificate in life coaching, and she has a few clients on the side whom she really enjoys. As she retires, she plans on delving more into the life coaching.

“I’d love to do it down on the farm, too – to do some life coaching activities there,” Anne says.

But in reality, the future is still unknown. New business opportunities are on her doorstep, and Anne is simply taking each day as it comes, with a little bit of goat farming in the in-between times.

“Who knows what will happen.”

Gary Nosacek, age 63, has spent the last 2 years travelling all over the world, learning new things, and making an impact.

First, he went to France to learn how to cook.

“My wife has a great reputation as a cook, so in October, we hopped on a Tauck Travels River Cruise.”

They learned to make macarons at Cordon Bleu, the art of pairing wines and cheeses at Chateauneuf-du-Pape, and they even met a gypsy family in Camargue that trains bulls for an unusual sport.

Gary explains, “The bulls have different colored ribbons put on their horns and young men try to collect as many ribbons as possible by chasing the bulls, or getting chased by them, depending on how the bull feels that day. They thought that the sport was too easy at first, so now you have to collect the ribbons in the proper order. If you get a color out of order, it doesn't count.”

Gary wanted to try it, but his wife quickly reminded him of the time right after he turned 50, when he climbed into the ring with a pro wrestler for a charity event. “I ended up with whiplash and badly bruised ribs, so I guess trying the bull thing, had they let us, would not have been good.”

On to Israel and Rome – while there, Gary, a church deacon, spent 10 days wandering through the history of the early church. He gave talks at the site of Jesus' birth, at the site of The Last Supper, and in a catacomb in Rome. He also got to be part of private events in the tomb, at Cana and in the Vatican.

“I guess we don't do ‘tourist.’ We do adventure,” says Gary.

Then, while in Sarasota, Florida, Gary had quite the experience with circus performers.

“I had a great 4 days hanging out with chimp trainers, clowns, trapeze artists, and the like. I was even given the title, ‘A First of May,’ which means it was my first season being included in the circus family.”

Gary was proud of the fact that the circus performers took him in and didn’t treat him like a “towner,” which is an outsider that the circus folks keep at arm’s length. “I guess I just have a circus face!” Gary explains.

On April 1, 2018, Gary and his wife left for Uganda. “That's the next adventure. A church in Milwaukee is helping to build a medical clinic in northern Uganda.”

Gary is going to help consult the clinic to make it work better.

Gary has quite the experience, but he chocks it up to his 85-year-old mother.

“She always said, ‘You can age like fine wine, or you can just be old. Old misses out on all the fun!’”