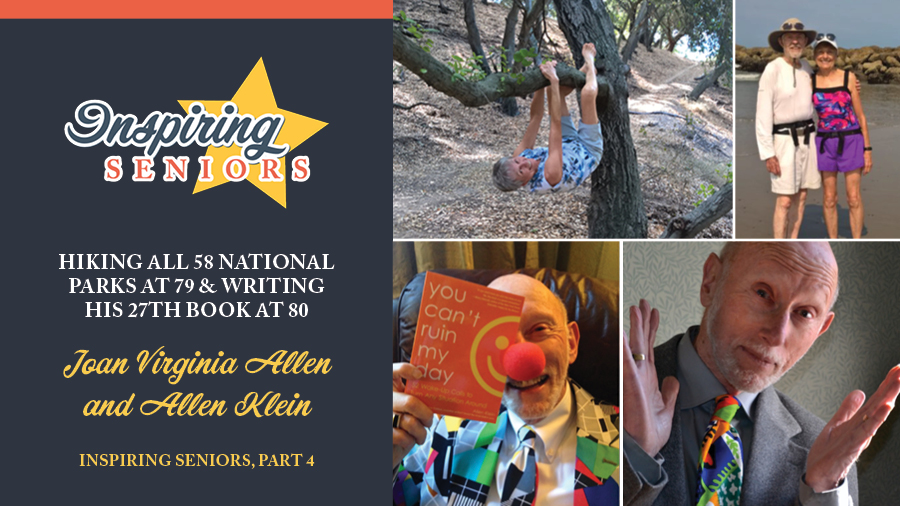 At the age of 78, Joan published her first book, and at 79, she is hiking the 58 national parks with her husband – they’ve just completed #35. Did we mention she’s on track to reach her goal of walking 1,000 miles for the year?

And at the age of 80, Allen, a self-proclaimed “Jollytologist,” is writing his 27th book. Allen shows us that humor can be used to gain perspective and to cope – even in the most tragic of times. These are their stories.

Joan Virginia Allen is a very physically active person – she always has been. “My husband and I were Olympic-style racewalkers and had done two half marathons race walking,” she says. Her first was at age 69, and the second at age 70.

And yes – she bettered her time.

But Joan would find out within the next year – at age 71 – that her physical body wasn’t keeping up with all of her energy.

ON HEALTH PROBLEMS AND BEING PUBLISHED AT 78

“I became certified to teach weight lifting to older adults to maintain and build stronger bones. I thought I was doing everything right and yet my bone density showed osteopenia starting, plus all those other issues,” she says.

With a prolapse surgery on her horizon, Joan decided to take matters into her own hands.

She started taking Restorative Exercise classes, now called Nutritious Movement classes, and she was soon able to cancel the surgery, resolve her foot issues, and take up hiking.

While taking the classes, Joan and three other ladies decided to write a book, Dynamic Aging. They also started a blog, Dynamic Aging 4 Life.

Joan says, “What a thrill! Published at 78! Wow! I feel a little like Grandma Moses who began her life as a serious painter at 78.”

Joan and her 3 co-authors talk about their message of defying the effects of old age on the Today Show starting at the 2-minute mark.

“No, everything has not reversed,” she says, “but I rarely experience back pain, and when I do, I now know what to do about it.”

She excitedly says that she recently walked 5 miles – barefoot – on a Maui beach, and even though it’s been 8 years since these health issues started bothering her, she’s getting better.

“My knees no longer bother me when hiking, and my balance is amazing!”

ON HIKING THE 58 NATIONAL PARKS AT AGE 79

At 79 years old, Joan is attempting to hike all 58 national parks with her husband – and she’s over halfway there with 35 under her belt.

“I never thought I could climb up and hang from a tree ‘at my age,’” says Joan. “And there I am at 78 climbing up and hanging from one.”

“Each park is unique and spectacular in its own right,” Joan says. Some of their favorite hikes include:

For Joan, part of the adventure is making your way to the trail itself. There are usually narrow, winding roads that are unpaved with deep potholes. And even then – finding the start of a trail can be a thrill.

“Here’s the trail sign – don’t let that fool you,” she says. “Finding the start of the trail required all the hiking skills we have developed the years.”

She explains, “I like the idea that I am doing something proactive to work on optimizing my physical health while totally enjoying adventures into unique and spectacular parts of our landscape.”

“I no longer hike in rigid high-top steel-shanked hiking boots. I’ve changed to minimal footwear for shorter hikes. It has strengthened my feet and ankles so I can do most hiking in more flexible footwear,” Joan says.

Joan is adventurous, and she sees her age as merely a number. “What does the future hold as I go into my 80s? What is possible? How will I prepare for new adventures?” she says.

For now, Joan continues to hike national parks with her husband, and every day, she’s working toward her goal of walking 1,000 miles in a year.

“I love to write on the calendar at the end of each day how many miles I have racked up. Over the past five months, I have averaged 110 miles per month – well over my goal and well on my way to hitting 1,000 miles for the year – or more.”

And at 79 years old – almost 80, Joan smiles. “I am just getting better with each passing year.”

“I will be 80 on April 26 and still going strong,” says Allen Klein, a writer, speaker, and self-proclaimed “Jollytologist.”

“My keynote presentations and workshops show audiences nationwide how to find and use humor to deal with their changes, challenges, and not-so-funny stuff,” he says.

At the young age of 34, Allen’s wife died of a rare liver disease. He saw how humor helped her and those around her cope, which inspired him to get into this unusual line of work.

GIVING A TEDx TALK AT AGE 78

He begins his presentation with a flashback to when he was seven-years-old when his parents took him to see his first Broadway show, Oklahoma. They came in late and Allen thought that like a movie, it would play again. His parents took him kicking and screaming out of the theatre – he didn’t want to leave! From that day on, he decided he wanted to be a scenic designer.

Many years later, he got into Yale Drama School to become a scenic designer. At the end of the first year, they asked Allen to leave. “They basically said I have no talent. So I left Yale, went back to New York City, and took a month-long test to become a designer. And guess what. I failed.”

But Allen was determined. He took the test again and passed. Before long, he was doing nationwide productions on television, and his fellow classmates were still doing college productions.

Allen designed shows such as Merv Griffin, the Jackie Gleason show, and his favorite, Captain Kangaroo.

“I learned a really great lesson on that journey. That lesson is that our thoughts and our intentions create our reality.”

Many individuals attended the performance, but Allen is particularly excited about the online reach his presentation has received. “It has just reached over 22,000 views!”

“If you want to be a happier person, then you need to start doing things to attract that happiness,” Allen says.

The book is titled A for Abundance, and Allen’s goal is to show the reader that it’s not just money that makes you wealthy – abundance is about so much more than material wealth. “We all have a richness in our life when we choose to view our world that way,” he says.

Allen actually got an offer from a publisher two days ago – March 12, 2018 – and he’s currently deciding whether or not to take it.

Allen continues, “A friend of mine says I live a charmed life. Maybe so, maybe not. But I do have a lot of abundance in my life. I want to share that with others and how they might have that, too.”

His previous book, Secrets Kids Know, will be receiving a book award in April from The Association for Applied and Therapeutic Humor.

The beginning of the book opens with Allen’s recollection of writing his first book, The Healing Power of Humor. “I was under a tight deadline. Kids know nothing about deadlines, so about every fifteen minutes, my daughter [...] kept coming into my office and interrupting me.”

To remedy this, Allen posted a sign on his door that read “Do Not Disturb Unless It Is an Emergency.”

A few quiet moments later, he heard a knock on the door. He yelled and asked what the emergency was, and his daughter replied, “I wanted to tell you that I love you!”

Allen realized in that moment that it took a child to show him that even though he was writing about keeping your sense of humor, he had lost his.

ON USING HUMOR DURING TRAGEDY

We live in a day and age where every week, there seems to be a new tragedy in the news. Most recently, we’ve heard about the school shootings taking place in our nation.

Allen’s mission is to inject humor in the trials and challenges of life, but is there ever a time when humor just isn’t appropriate?

“Yes, humor can be used too soon,” Allen says. “It can help, or it can hurt. What I have found is that when those closest to a tragic event can find something funny to laugh about during their loss, it is a healthy coping mechanism. But when someone who is further away from the event pokes fun at it, it may not be appropriate or appreciated.”

Allen continues to say that those affected by the school shootings are probably not finding much to laugh about right now – yet the newspapers are printing political cartoons about guns, teachers having guns, and so on.

“Those kinds of cartoons can help us both get a perspective on the situation while making a point about gun violence and some of the absurd solutions to our current out of control circumstance,” he says.

Allen doesn’t plan on slowing down anytime soon. “Sure, I may be slower and get more tired than I used to (that is what naps are for), I want to keep moving. In fact, it’s what makes life worth living.”

And that sentiment runs in the family. “My mom lived until 95 and was active until just a few weeks before she died. At her independent living facility, they would have live music every Saturday night. She would get up and dance with her walker. She nicknamed it Fred Astaire.”