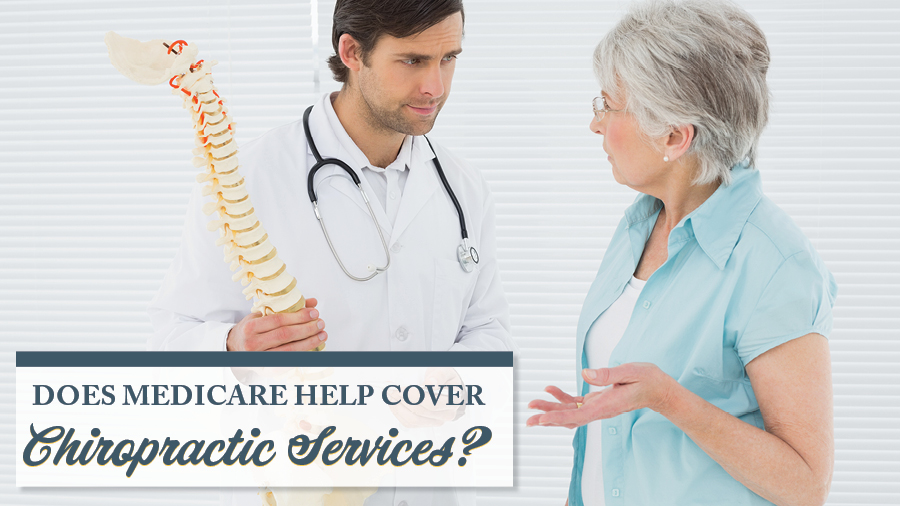 Many individuals with body pains are turning to chiropractic care to avoid prescription drugs and expensive surgeries. The idea is that chiropractic care helps cure the root of the problem rather than just treating the symptoms.

However, the Medicare system doesn’t seem to see the value of chiropractic care, because it doesn’t offer much coverage for it.

If you’re on Medicare, and you want to see a chiropractor, you’ll want to be prepared for what bills are your responsibility and what bills will be partially covered.

What Chiropractic Care Does Medicare Cover?

If you visit Medicare’s website and read what’s listed under the chiropractic section, you’ll probably walk away confused.

Here’s what it says:

“Medicare Part B (Medical Insurance) covers manual manipulation of the spine if medically necessary to correct a subluxation when provided by a chiropractor or other qualified provider.”

Dr. Jamaal Rahman, DC, a chiropractor at Stout Chiropractic in Normal, IL, breaks that down for us and explains that Medicare covers one thing and one thing only: the chiropractic adjustment.

In order for Medicare to help pay for that adjustment, you need to have an active problem, like chronic lower back pain.

The three billing codes Medicare will cover are 98940, 98941 and 98942. Dr. Bruce Godfrey, DC, from Godfrey Chiropractic in Nebraska, explains that these are three levels of spinal manipulation, or chiropractic adjustments.

Keep in mind that Medicare covers 80% of the Medicare-approved amount, so you’re still responsible for the remaining 20%, and your Part B deductible applies.

Any other chiropractic services you might need – like X-rays, massage therapy, maintenance care, preventative wellness, and acupuncture – are not covered at all by Medicare.

Dr. Rahman explains that most chiropractors will need to do an X-ray to list the levels of the spine and how it was diagnosed in the doctor’s soap note. But Medicare won’t pay for that X-ray. Services that are not paid for fall on the responsibility of the patient.

There’s good news, though – chiropractic care doesn’t have to break the bank like emergency room bills often do.

For starters, chiropractic care is very affordable. Dr. Rahman says, “It’s usually not too much of a problem, especially after a patient sees the value of the adjustment and is determined to stay in good physical and overall health through old age.”

Dr. Godfrey says that any non-covered services are paid on a cash basis at Medicare rates: “For instance, an initial exam and consulation costs $41.77, and X-rays are $30-40.”

In addition, almost all chiropractic practices offer some kind of payment plan to ease any financial burden you might experience.

For seniors, treatment plans might be a bit longer, just because the problem is more likely to be chronic since it’s had more time to develop. Dr. Godfrey says that the average case of uncomplicated lower back pain takes anywhere from 12 to 24 visits to a DC to resolve. He says that a typical cost for around 20 visits would be about $780, with Medicare paying for about $600 of that.

So, is it worth it to put together some funds in order to pay for a chiropractic care plan? Dr. Rahman believes that treating the cause of the pain rather than the symptoms could actually save you a lot of hassle – and hard-earned money – down the line.

“More research is showing that chiropractic helps lower back pain and reduces the need for surgery. That seems like reason enough to at least give it a try, even if it means spending money out of pocket,” he says.

Dr. Godfrey agrees and adds that there are many other healthcare services that are paid out-of-pocket, because they’re worth it. Examples include laser eye surgery, orthotic shoe inserts, and cosmetic surgery.

Should Medicare Step Up And Pay For Chiropractic Care?

According to the American Chiropractic Association, new research in the Spine journal has shown that chiropractic care improved the overall health or well-being of individuals with back and neck pain.

One study even showed that regular medical patients saw their pain get worse, while chiropractic patients reported that their pain was better or much better:

Dr. William Charschan from Charschan Chiropractic in New Jersey says that the current Medicare coverage is a disincentive for patients to see chiropractors at all. This can be extremely frustrating for doctors, especially when they have a unique way of actually curing patients.

“Many patients visit after fully-covered services, such as physical therapy, have failed to deliver the desired results, and some do not want to take medication,” Dr. Charschan explains.

This leaves us all quite confused – if Medicare’s goal is to help Americans be healthy, why would they refuse to pay for most chiropractic care given this research?

Journalist Philip Moeller explains in his weekly PBS column, “Ask Phil,” that the concept behind what Medicare will and will not cover is a huge gray area. He explains in his column:

“‘Medical necessity’ is a governing concept of what Medicare will and won’t cover, but it hardly lends itself to a universally agreed-upon definition or application. And this concept can be especially difficult to apply consistently in therapeutic situations.”

For providers like Dr. Godfrey, the sad reality is if he only saw Medicare patients, he probably wouldn’t be able to stay in business: “For a 98941, or a standard chiropractic adjustment, Blue Cross Blue Shield (BCBS) pays a bit over $51. For the same service, Medicare pays $39. That's about 25% less.”

While a 25% paycut may sound sustainable, that’s where the Medicare payments end. Medicare covers no other services, and BCBS covers exams, X-rays, therapy modalities, and so on.

Dr. Godfrey continues, “I think if we went to Medicare-for-all, my profession would suffer greatly unless there were significant changes in reimbursement.”

In sum? Medicare has yet to determine that chiropractic care is a medical necessity, and since it’s hard to pin down what medical necessity even means, we’re stuck in this limbo of lackluster coverage.

Dr. Charschan says that his profession is trying to get policymakers to change that by showing how chiropractic care could end up actually saving the government money: “The drug-free approach can improve the government’s fight against opioid addition by treating the cause rather than the symptom.”

For now, the fight continues, but your health shouldn’t suffer for it. If you haven’t seen a chiropractor because Medicare doesn’t offer good coverage, consider reaching out to a local practice for help.

Interested in insurance coverage, but not sure about the price? Get a Quote Now.

Get the latest news about Medicare