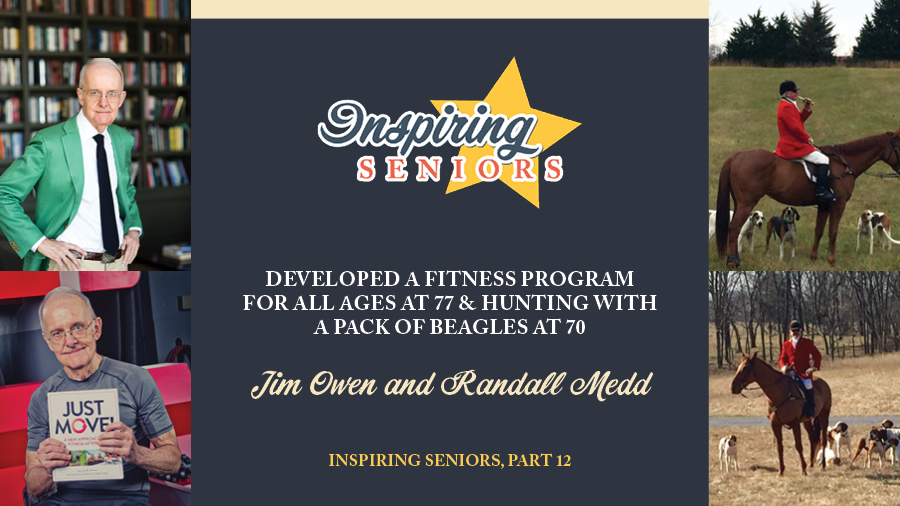 Developed a Fitness Program for All Ages at 77 & Hunting With a Pack of Beagles at 70 | Inspiring Seniors, Part 12

After the age of 70, many are happily retired. However, for Jim Owen, age 77, and Randall Medd, age 70, their work is far too fun. Retirement? Forget about it.

At age 70, James P. Owen realized that decades of a chair-bound lifestyle had taken their toll.

He was a former Wall Street rainmaker turned author and social entrepreneur, and at 70, most probably would’ve said that it was too late to get fit.

So Jim proceeded to gather a team of experts, and he developed a commonsense fitness program that anyone – at any age – could do. And that led Jim to write  Just Move!: A New Approach to Fitness after 50 (National Geographic, Sept 2017).

ON GETTING FIT AND WRITING JUST MOVE!

When Jim turned 70, he saw a video of himself shuffling up to the podium to give a speech.

“I was shocked! Could this stooped, tired old man really be me? I looked awful and felt worse,” he recalls.

Jim was giving a speech about his successful book, Cowboy Ethics, which had him on the road nearly nonstop for a decade. “That took a major physical toll. Too many airplane trips, too many late nights, too many miles in rental cars – at my age, there was no way I could keep up that pace.”

With lower back pain, two bad knees, a frozen rotator cuff, and about 20 unneeded pounds, Jim found himself at a loss.

“None of this should have been a surprise, because I had left no time in my schedule for fitness,” he says.

And then Jim had that lightbulb moment. He read a statistic that showed if you make it to age 70, odds are you’ll live at least another 15 years. “ I started picturing what those years might be like, given how things were going… well, it was all the incentive I needed to get in shape.”

Early on in his fitness journey, Jim got the idea to write a book. He didn’t really know what to do or how to get started, so he started looking for guidance. He was met with an overload of advice and a lot of conflicting opinions – not to mention celebrity-driven fads.

The worst part was that there wasn’t much out there for people in his age bracket. “How can someone who’s 35 really know what it’s like to have trouble getting out of a chair or wake up feeling so stiff you can barely move?” Jim says.

Jim hired a personal trainer, but that only took him so far. The trainer would spend an hour helping him get stronger, but that left no time to focus on other things like flexibility, balance, nutrition, and physical activities outside of the gym.

There was a need here – the need for comprehensive help for people his age that the fitness industry had completed ignored.

And Jim was ready to step in and fill that gap himself.

“Based on my own experiences, a lot of research, and input from fitness experts, I wrote my book, I do speaking engagements, and I do a lot of outreach via social media,” he says.

Jim’s main message is that as long as you can still walk, it’s not too late to get fit.

ON THE CONCEPT OF AGING

“You are the author of your own life story,” says Jim. “We see plenty of people who stay active and vital well into their seventies, eighties, and even nineties.”

Jim explains that some people are even ageist towards themselves – they can’t see past the wrinkles and gray hair in the mirror, and they think “I’m old,” and act accordingly.

“Ideas about age can be a self-fulfilling prophecy or even an excuse for unhealthy habits and a couch-potato way of life,” he says.

Sure, illness becomes more of a factor as you age, but that’s an uncontrollable wild card, and Jim points out that some of the biggest killers in our society – heart disease, cancer, and diabetes – are all at least partially lifestyle-related.

“This means they are to some degree preventable, as long as you eat right, stay fit, and stay connected with the world.”

“There is also growing scientific evidence that your beliefs about aging do much to shape your reality. Studies show that those who have positive views of aging and stay connected with their friends, families, and interests live longer than others – an average of 7.5 years longer, in fact – and are more satisfied with their lives. Similarly, a recent large-scale study by Yale University and the National Institute on Aging found that those who thought positively about aging were less likely to develop dementia, even if they had strong genetic risk factors for the disease.”

In the end, Jim is convinced that when it comes to getting fit, age can be an advantage.

As the years go by, we tend to become less focused on how we look and more concerned about how we feel. When we're older, it's about staying active and pain-free as long as possible.

Many are also past their peak career and family demands, giving them more time to devote to a healthier lifestyle – not to mention more motivation.

“Do I wish I had started 20 years earlier? Of course. But that hasn’t stopped me from doing whatever I can to take control of my health and my life. I’d much rather spend my time in the gym than in the doctor’s office, especially since I genuinely enjoy it.”

It’s now been 7 years since Jim first set out to get fit.

“At 77, I’m in the best shape of my life. And I intend to do everything I possibly can to make sure I’m still fit at 80 and beyond.”

He rides horses everyday, and he says he fox hunts and hunts with a pack of beagles.

“Last year I hunted the hounds for a recognized fox hunt,” he says. “I do more than those half my age!”

Randall has ridden horses all his life, and he’s fox hunted for about 45 years now.

“I grew up doing this. My whole family was involved in it here at the farm. It’s just a great country sport,” he says.

He was an amateur steeplechase jockey for 6 years in his late thirties and early forties, and he trained horses for a while. “It was all part of the fox hunting and racing,” he says.

In Maryland, fox hunting is fairly popular. There are a number of beagle packs there and in Virginia, and part of the charm is that it’s very much a tradition, which you can see from the Randall’s attire.

“The scarlet coat and what you wear is pretty much what they’ve been wearing for the past 300 years. It’s part of the tradition that we carry on,” he says.

ON RETIREMENT AND AGING

For most of his life, Randall had a large indoor arena where he held horse shows. “In 2004, I sold that portion of the farm and was basically retired. Although, I did own part of a soccer team,” he says.

After he retired, Randall stopped riding and hunting to travel and spend time with his wife. Two years ago, in October 2015, his wife passed away.

Later that year, Randall decided to start up hunting again, and he became the huntsman for New Market-Middletown Valley Hounds, a foxhound pack in Maryland.

“I don’t really consider myself retired anymore. I do part-time marketing with my son and I still run the farm… it’s a lot of fun.”

For Randall, he doesn’t feel that the ‘work’ he does is necessarily work.

“I enjoy working with the horses. It gets me out of bed in the morning. It takes up a good part of my morning. Then, I’ll work on marketing stuff and I’ll go to meetings in the afternoon.”

As far as his age, Randall sees both the advantages and disadvantages.

“I’m in shape, but things do get a little stiff and sore. You have to be pretty fit to be able to ride horses. You have to ride all the time – you can’t just ride once a week,” he says.

“However, because I’ve been around so long, a couple clubs have made me an honorary member. I just get a bit of respect,” he says.

As for the future, Randall wants to do some more travelling. “I have friends all over the country – it’d be nice to see them,” he says.

For now, Randall will continue to keep the fox hunting tradition alive.