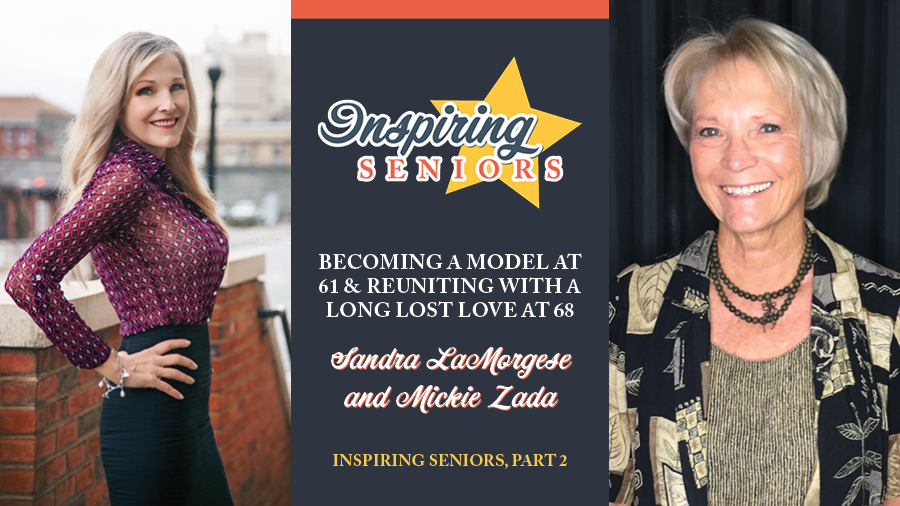 Becoming a Model at 61 & Reuniting with a Long Lost Love at 68 | Inspiring Seniors, Part 2

At the age of 61, Sandra started a completely new career as a lifestyle model and actress in New York City – after losing 50 pounds.

And at the age of 63, Mickie started a new business, and just a year later, she married her long lost love – a man she lost touch with for over 50 years.

For the past 6 years, Sandra worked as writer – and she was quite successful.

She worked her way up to being a featured international HuffPost blogger, and she became one of the Top 10 sought-after writers on Medium.

“The only thing with writing is that it’s very isolating. I was ready for a change,” she says.

And change she did.

Last year, Sandra decided to lose 50 pounds. “A friend of mine said to me, ‘You’re 60 years old, and you’re healthy. But what happens when you’re 70?’ I just started thinking about it and realized I wanted to be healthy my whole life.”

Sandra wasn’t losing the weight to look a certain way, either. “It wasn’t about body image, believe me. I loved my curves.”

For her, it was all about being and staying healthy for as long as possible.

Around the same time Sandra decided to lose the weight, her HuffPost editor mentioned that models over 60 years old are the ‘in thing’ these days.

That got Sandra thinking, and she started doing research. She found that a ton of mature women and men do professional modeling.

But the pushback she got from the people in her life gave Sandra the drive she needed.

She lost the weight by training about 2 hours every day, but she had no interest in doing the intense workouts she did when she was young. “I wanted to try to find something that appealed to me now. I’ve mellowed out.”

So she started walking, jogging, and attending pilates, yoga, and strength training programs – and she lost the weight.

But it was also a combination of healthier, conscious eating that helped her reach that 50-pound weight loss goal. “I got out of denial. I got a scale and that freaked me out – it opened my eyes.”

After that, Sandra’s secret was measuring and weighing her food. “I didn’t even realize how much food I was eating. You just throw oil on your salad and eat things mindlessly without measuring. Once I started measuring, I still had enough, but it was a lot less calories, and I was creating a deficit.”

But it was never about “dieting.” It was just about being conscious. Back in the day, Sandra wouldn’t think twice about getting a double cheeseburger with bacon and a couple beers, but now? “Forget it,” she says. “Maybe on a free day or something.”

ON BECOMING A MODEL IN MANHATTAN AT AGE 61

The weight loss helped Sandra feel like she could compete in the modeling industry. She hired a professional photographer in Manhattan, and she sent her photos to 100 modeling agencies all over the world.

Sandra also works with Shutterstock, one of the top stock photography websites on the internet. “They actually contacted me,” Sandra says. “They found my profile on one of the modeling and acting websites, and they asked me to work for them.”

After the representative contacted Sandra, they set up a SkinCeuticals photo shoot. Shortly after, Sandra packed her stuff and went to Connecticut for the shoot. “Everything is online now – everything is global. You don’t have to necessarily be in any type of area. New York or LA is ideal, but people need photo shoots everywhere.”

As far as posing in front of the camera, Sandra said there’s nothing to worry about. “The photographer knows what they’re looking for. They pose you. They’ll move your shoulder here, they’ll tell you to drop your chin there. They guide you through it.”

As for being a 61-year-old model in a world full of 20-somethings, Sandra says her age is a huge advantage.

“I can’t even seek more jobs out right now because I’m so busy. Women do not realize their value – not everyone in this world is young. We have so much to offer! I don’t know if middle-aged women realize this. I didn’t – I’m just shocked,” she says.

Now, Sandra’s goal is to inspire people. “The value of our lives are still there after 60. I feel like I’m just getting started. I honestly do. You can do anything!”

And retirement? It’s not in the picture at all for Sandra. “Why bother? Why? It doesn’t make any sense to me to retire. And do what?”

In Sandra’s opinion, the thought of retirement is synonymous with losing purpose, which she says is a huge part of staying young.

“[Retirement] is what makes people get sick – cancer, obesity, illnesses. They’re working in a job that they hate, and they force themselves to go there every day. Just to get their social security at the end. People don’t really understand that you’re more in control of your life than that.”

Nowadays, Sandra is balancing her new modeling career with acting. She’s in the play The Vagina Monologues, and she’s doing a feature film. “I get to be killed at the end, which is totally awesome,” she says.

Sandra’s plans for the future beyond what she’s already doing is to write a 3rd book, but even that feels difficult to plan.

“I don’t put any boundaries or limitations on my growth. But I feel like something great is going to happen. And I’m not sure what it is, but I’m ready for it.”

– All of Sandra's photo credits go to Josefina Hunter –

On Mickie’s Twitter, you’ll find snippets of inspiring thoughts that call you to take an action or ponder self-reflection.

“Write down one or two of your unique talents, gifts. What do you have to offer to the world?”

“What is one baby step you are willing to take this weekend to begin creating the life you want to live?”

“Do you believe that other people’s opinions of you are a total waste of your time? It doesn’t matter what anyone else thinks about you!”

And this inspirational attitude is only a glimpse at what Mickie has dedicated her life to – helping women who have escaped abuse.

ON LEAVING AN ABUSIVE MARRIAGE

She married at 18, and Mickie says it was “a perfect pattern” of abuse. It started out as control, it went to emotional abuse, and it turned into physical abuse about 4 years into the marriage.

“It was there all along, but just like most women who’ve been abused, I didn’t recognize I was being abused. It sounds crazy, but it’s true.”

Mickie lived in the abusive marriage for 34 years. “It wasn’t all bad, but it was a situation where I never knew who was walking in the door.”

After about 23 years of marriage, Mickie finally realized that the relationship was abusive. “I watched a movie about a woman who was living in abuse, and that was really the first time I thought something was wrong.”

Mickie started making promises to herself – the next time she was bruised, she’d leave. On and on the promises came and went, but she never made the move. “The amazing thing about living in abuse is that we love our abusers. It’s hard to explain, but we do. I don’t anymore, but when I was in that mindset, I did.”

Until one day, 16 years ago, he bruised her, and something clicked for her. She finally left the marriage. “I had actually left 3 times before, but the 4th time, it stuck.”

Fast forward to today – Mickie started her business, Surviving Abuse Network, which was created to help women who have escaped abuse.

“This would not and could not have happened when I was young,” she says.

It actually took a long time for Mickie to feel comfortable talking about abuse in a public way. “My current husband really helped me come to the realization that I’ve been talking around abuse and that it was time for me to create something that addressed it head on. That was tough; it was frightening.”

And the other issue Mickie faces is that people don’t want to hear about something so dark. “Society doesn’t want to know about it,” she says. “I’m not going to say it’s fun to talk about, but I know it has to happen.”

Mickie has helped a myriad of women through her podcast, her content, and now her business.

She faces hard topics head on through her podcast with episodes such as “You’ve Been Out of Abuse for a While: What Now?” and “Society Does Not Want Us to Talk About Domestic Abuse.”

She’s realized that her experience in an abusive relationship happened so that she could come out on the other side and help other women, which is now her mission.

ON REUNITING WITH HER LONG LOST LOVE

Back when Mickie was 15, she dated Alan, who was 16. Mickie’s family moved, and she and Alan lost touch for nearly 50 years.

One day, Mickie was nudged by a friend to check out Classmates.com.

“When I logged in, it said I had a message,” she recalls. “I clicked the message, and it said that the person who sent this message paid for me to see it. What?!”

Alan had left the message some 18 months earlier, but Mickie says it was meant to be. “If I’d read that message 18 months earlier, I wouldn’t have responded, because I was in what I thought was a committed relationship. Thankfully, that didn’t work out!”

Mickie responded with her phone number, and Alan called her within 5 minutes. “We talked on the phone for 2 hours every single night for 3-4 months.”

Then, Alan decided to come to Florida to see Mickie, and it was like a reunion that was always meant to be. “He was my first real love. When I saw him, things went right back to where they were. He’s the one who was always in my heart.”

It wasn’t long before Mickie and Alan were happily married.

“As young people, you see age, wrinkles, has-beens. And some people over 60 deserve that characterization! But most don’t.” Mickie explains.

For her, age is a huge advantage in all areas of life except being in great physical shape.

“The strange thing about life is that our bodies age but our self-identity does not. I look in the mirror and see my mom. In my head, I’m still in my 30s.”

Mickie and her husband, Alan, say that they love their age.

It has given them the perspective and power to stop caring about what people think. “At this point in my life, I’ve become more mellow and less outspoken,” she explains.

Mickie closes by explaining that as you age, you start to realize what’s important and what’s not. “I intend to live until 106. The first 53 years were everyone else’s, and these next 53 are mine.”