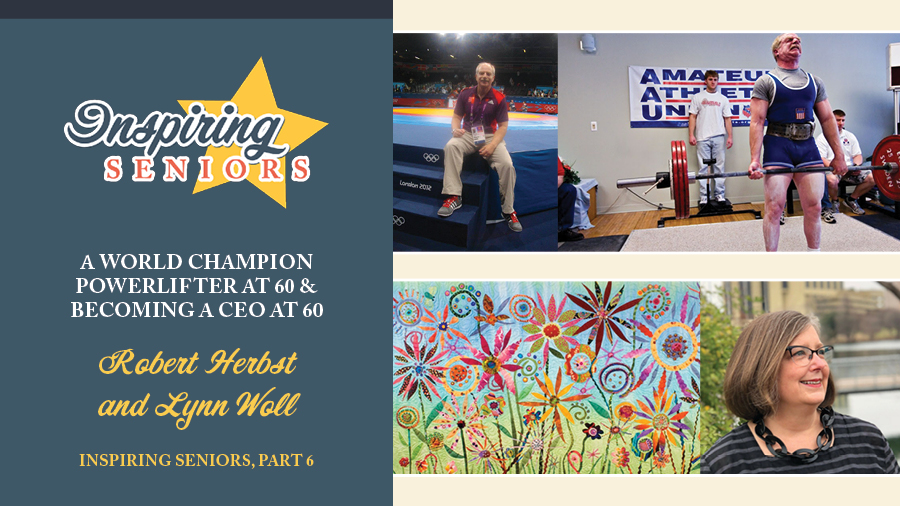 A World Champion Powerlifter at 60 & Becoming a CEO at 60 | Inspiring Seniors, Part 6

Over the course of this series, we’ve seen just how incredible life can be, no matter your age. We’ve met Sandra, who became a model at the age of 61, we met Joan who is hiking all 58 national parks at age 79, and we met Allen, who’s writing his 27th book at age 80… and that’s just to name a few.

Needless to say, age is clearly just a number. And the two individuals in today’s installment of the series take that notion to an entirely new level.

Robert Herbst is a record-breaking powerlifter – at age 60. And Lynn Woll found herself becoming a CEO at age 62.

Robert Herbst, age 60, is an attorney, weight loss and wellness coach, and powerlifter.

And he’s not just any powerlifter – he’s a 19-time World Champion, 33-time National Champion, and member of the AAU Strength Sports Hall of Fame.

Don’t believe us? Check out this picture:

But Robert has had to overcome a seemingly insurmountable challenge to get where he is today.

FROM SCOLIOSIS TO POWERLIFTER

When Robert was a child, he was afflicted with scoliosis – one hip was higher than the other, which made his right foot turn out 90 degrees when he walked or ran. The doctors told him to avoid lifting anything heavy and to live a fairly sedentary lifestyle.

In retrospect, we all know where this story is going. Robert ignored the doctors, pulled inspiration from Charles Atlas and Arnold Schwarzenegger, and he purchased a York Barbell 110 pound set.

That changed his life.

“Even though my back hurt, I stuck with it, and I kept adding weight and training week after week. I soon started to notice the changes – I got healthier and stronger, and while my spine still corkscrewed around, it didn’t bother me as much,” he says.

After college, Robert started entering powerlifting competitions, and the rest is history. Just five years ago, Robert was a semifinalist for the prestigious AAU Sullivan Award. “Not bad for a guy in his 50s with a crooked back,” he laughs.

Robert also supervised the drug testing at the Rio Olympics.

He explains, “Being fit helped me strike a rapport with the athletes as I looked like them, and they immediately had a comfort level they did not have with the usual middle-aged official. The Korean wrestling team even sent their interpreter over to ask me who I used to be and what I used to do!”

Robert acknowledges that our society is full of agism, but he’s constantly going against the norm. “At 60, I’m more fit than most men half my age.”

Good thing he didn’t listen to his doctors back in the day – his current one says his weight training has given him immense benefits.

“My doctor tells me that weight training has given me good cholesterol levels, helped me keep off those extra pounds that usually come as you get older, and it slowed many of the normal signs of aging,” Robert explains.

Every single day, Robert makes the conscious decision to keep training, to keep pushing himself, and to keep inspiring others to take action. “I know that anyone can improve their life like I did through the benefits of exercise and a positive mental attitude,” he says.

That’s why his goal is to inspire others to follow in his footsteps. Well, not exactly – you don’t have to be a powerlifter to benefit from his message.

Robert now works with a number of not-for-profits to inspire youth to be fit and to use the discipline they gain from exercise to study and advance themselves. He also speaks at corporate events.

“As someone who wears a tie and has a mortgage, I understand how to balance fitness with a career and family life. Overall, I want to spread the message that people should exercise to improve their lives.”

At age 62, Lynn Woll is truly living life to the fullest.

When she turned 60, Lynn moved from Seattle to Austin to try a new job at Key Ingredient. One year later, she became the CEO.

Key Ingredient is a recipe website with over 2.5 million unique visitors every month. The idea behind the site is to bring together foodies, bloggers, and great content to inspire home cooks to make better food.

Lynn was only a natural fit as CEO – she started cooking and experimenting at a very young age. “I’d toss in a few new ingredients to see how it might turn out. This might be why baked goods don’t always turn out so well!” she says.

She explains, “It’s enjoyable to take traditional marketing tactics like word-of-mouth marketing and implement them in today’s digital space – influencer marketing. Not everything is really new again!”

Alongside her new position as CEO, Lynn also launched Create Whimsy, a website that shares the stories of makers to inspire everyday creativity.

During the day, Lynn works for Key Ingredient, and in the morning, at night, and on the weekends, she spends time with Create Whimsy.

“I’m a lifelong learner. I love the digital world where there is always something new to learn, whether it’s about technical SEO or learning to crochet (which was my goal last year!).”

Lynn has taken on new adventures, and she’s been successful in record time.

To Lynn, her age has given her the tools she needs to hit a major milestone in her life that’s truly the start of a new adventure.

She explains, “Unfortunately, there are some people that feel and act old, which plays into the stereotypical thoughts of a ‘senior’ being someone with mobility and memory issues.”

But she doesn’t see her age as an obstacle of any kind – if anything, it’s an asset.

“Being a senior means you have breadth and depth of experience and expertise – more to share and contribute.”

Lynn closes by saying, “With age comes the time to explore your creativity and be less influenced by others opinions.” 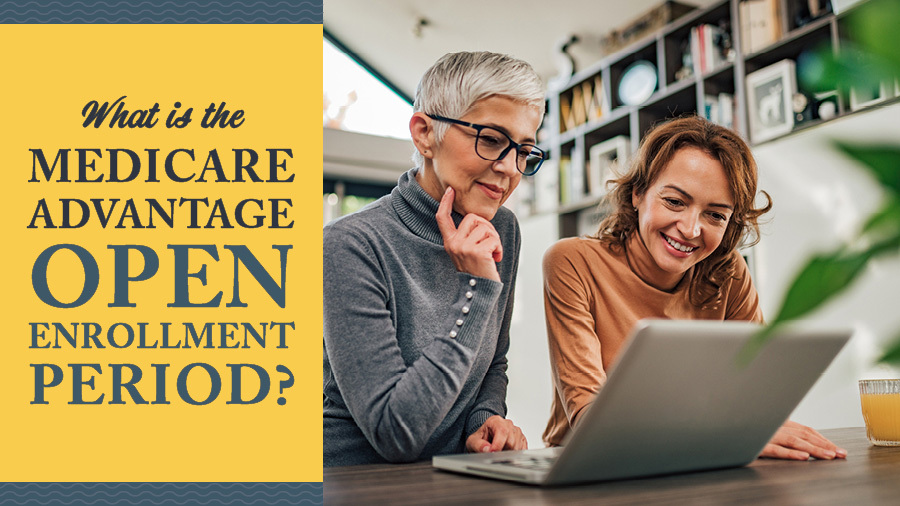 What is the Medicare Advantage Open Enrollment Period (MA OEP)? 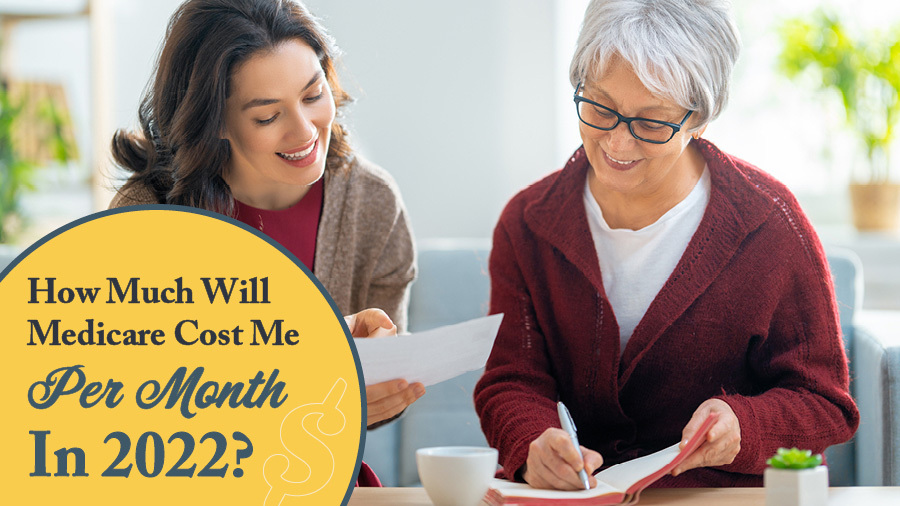 How Much Will Medicare Cost Me Per Month In 2022? 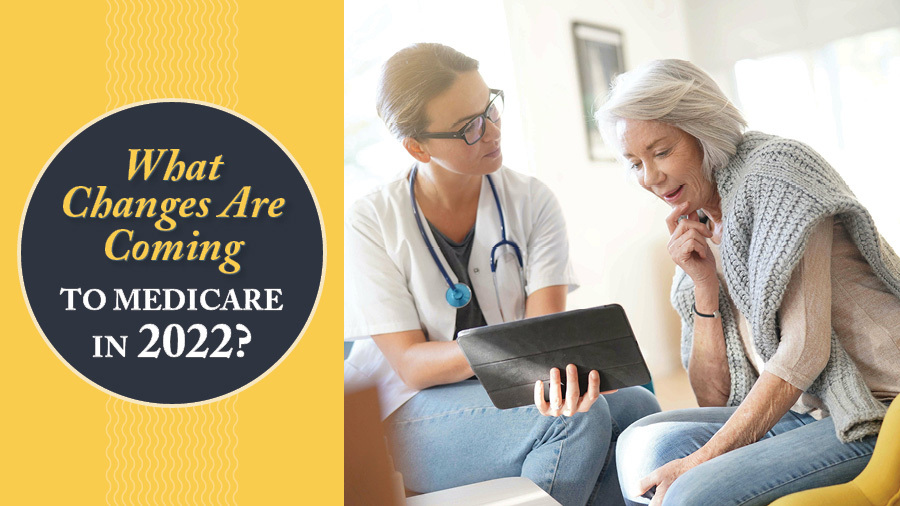 What Changes Are Coming to Medicare In 2022?