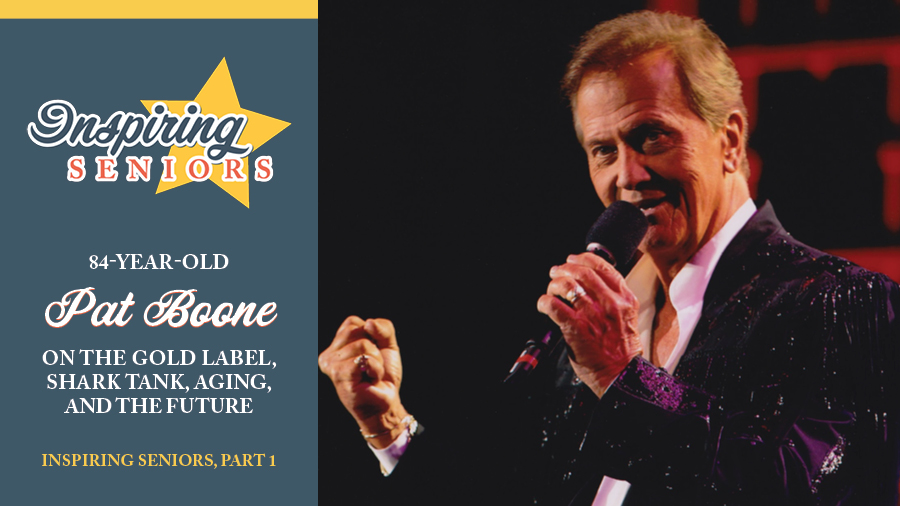 “I wish I could figure out how to retire,” says Pat Boone, now 84 years old.

Pat has sold more than 45 million records, and he was second-biggest charting artist of the 1950s, second only to Elvis Presley. He’s responsible for hits such as “Moody River,” “Speedy Gonzales,” “Ain’t That a Shame,” “Love Letters In the Sand,” and “Tutti Frutti.”

Many new adventures brighten up Pat’s life, from starting a new record label, The Gold Label, to striking the biggest deal ever on Shark Tank, to travelling to Israel for a historic global TV special this May (2018).

Pat continues, “Retirement will probably sneak up on me. I may ‘get retired’ more than consciously retire. I’m too inquisitive. I have energies, and I’m able to initiate things that I think of. It’s hard to quit when you can still be active and productive.”

And productive he is.

ON STARTING THE GOLD LABEL

Pat Boone started The Gold Label, a record company for his peers who had huge hits back in the day but that weren’t able to produce new records in today’s youth-centric music industry.

“I started a record company for people like me. People who’ve sold millions of records – who are still performing and have fans who want to hear us.”

While the label got off to a great start, Pat says there was a snag along the way when the distribution company went bankrupt. “But we’re still moving along,” he says. “We’re selling lots of records by big name artists.”

ON THE RECORD-BREAKING SHARK TANK APPEARANCE

About 2 years ago, in his early 80s, Pat made the biggest deal in the history of Shark Tank.

“It was a car that runs on air invented by a man in France – a motor driven by highly-compressed air,” Pat explains.

Pat’s goal was to build the first plant in Hawaii – but he knew it would be expensive. He had a big ask – $5 million for 50% of the company.

On the show, Pat said, “Our goal is to give to America the leanest, cleanest, greenest form of transportation ever to hit our crowded, polluted cities.”

He ended up striking the deal with Robert Hershovic for exactly what he asked for – $5 million for 50% of that first plant.

But… it didn’t exactly go as planned after the show.

“He went off to Dancing With the Stars,” he recalls, “...and then to Europe with the instructor.”

Pat admits he’s still a bit annoyed by the entire situation. “He’s never given me the courtesy of a phone call. He said it was an honor to meet me, but he never called me, so I don’t want to do business with him anyway. In that instance, I was shark bit.”

Nevertheless, the endeavor is still on. The car company is real, and it’s being manufactured by Tata Motors in India – one of the biggest car companies in the world. They make Range Rovers and Jaguars among other cars. They’ll be going into full production on the air car that Pat introduced on Shark Tank.

“So here I am, a new Junior Thomas Edison or Henry Ford, and I didn’t get started until I was over 80,” he says.

There’s no doubt that there’s a bit of a stereotype when it comes to seniors. We see it in commercials, on the media, and perhaps even among conversations with your peers.

But Pat, at 84 years old, doesn’t see aging as a detriment in any way. If anything, it’s an advantage.

“We’ve had 2 presidential candidates in the last election – both were 70. Obviously, we’re learning that people have great capability and wisdom.”

Pat’s own role model is Moses, who lived to be 120. He explains, “When he led the people of Israel for 40 years through the wilderness, he started when he was 80!”

Today, Pat plays tennis to stay active. “I play every Friday with a younger kid. He’s only 80.”

They play for 2-3 hours on Saturdays, and it’s quite the competition. “Sometimes he wins more, and sometimes I win more, even though there’s 4 years between us.”

This May (2018), Pat Boone and Rabbi Eckstein will be hosting a tour to Israel for its 70th anniversary called Pat Boone’s Holy Land Tour.

“We’re going to do a music video and a TV special at the Roman amphitheatre of Caesarea as part of the tour,” Pat says.

Pat and all of the tour members will be in Israel for the gigantic celebration of the 70th anniversary of the modern state of Israel. “Prime Minister Netanyahu has promised to meet with us, and it’s going to be a very historic deal – and I’m hosting it!” he says excitedly.

Pat admits that he’s very busy, but he plans to keep on keepin’ on. “My wife is asking if we can just have some alone time, but I always tell her that we have that for several hours a day,” he laughs.

“She realizes that I can’t cut off the creative juices,” he continues, “If I think of something that ought to be done, I initiate it.”

For those who are nearing “retirement time,” Pat gives some candid advice: “Clear the deck. Simplify. Get ready for the things you thought you could do but never had time to do.”

“Now you have time.”