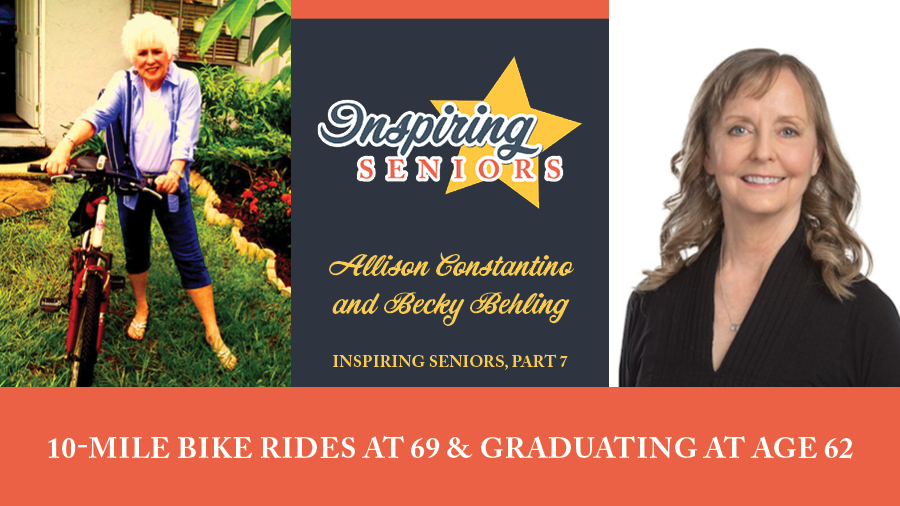 In this installment of the Inspiring Seniors series, we meet two astounding women – Allison Constantino, who casually explains her 10-mile bike rides (she’s 69 by the way), and Becky Behling, who graduated from the Feldenkrais Method Training Program at the age of 62.

At age 69, Allison Constantino calls herself a lucky girl who loves the outdoors. She works part-time at a country club as a receptionist, and she spends the rest of her time taking photos, helping with the ocean conservation movement, and being active.

She was raised in Texas and had the opportunity to ride horses, play tennis, and enjoy everything that the outdoors had to offer. “I’m part mountain goat,” she laughs as she recalls how she’d often climb trees.

To this day, Allison loves being outdoors as much as ever. She explains, “I take a quick 30-minute power walk before going on a 10-mile bike ride every day.”

She goes on the rides with her husband, who enjoys doing the same things Allison does.

“I’m bicycling, but I’m also looking for photo opportunities. It’s like bicycling with a mission,” she says.

Depending on the route, Allison will bike for about an hour. She uploads her photographs to Instagram with the hashtag #AllisonsBackyardArt.

Sunrise in the town center What a beautiful sunrise on my bike ride this A.M.! Really stunning morning! The sun was just coming up and there was just a hint of color on the horizon! So pretty!!! Allison-Constantino.pixels.com #allisonsbackyardart #oviedo #florida ————————————— #outside #outsideisfree #florida #floridaartist #sunrise #allisonsbackyardart

Allison also paints and has 6 of her pieces on display at the City of Casselberry City Hall in the Orlando, FL area. She sells her artwork online and boasts over 43,000 visitors to her online gallery.

“Even in grade school, they’d ask someone to come up to the blackboard and draw something, and that was me! I’ve always loved to draw,” says Allison.

In addition to her artwork, her bike riding, and a part-time job, Allison works to help with ocean conservation.

She started a group of artists and photographers who focus on the movement, and there are now over 500 images on her site. She also partnered with Melbourne Beach in the “Rise Above Plastics” campaign to end the use of plastic bags that end up in the stomachs of sea turtles.

“The sea turtles eat the plastic bags, and it wraps up in their stomach and kills them. It’s so sad to see what’s happening to them. The sea turtles think the bags are jelly fish because of the way they float in the water, and they eat them and die,” Allison says.

Allison draws sea turtles, notecards, and images and sends them to the mayor to use as her little way of helping with the movement. “It’s a little thing, but a little bit can go a long way sometimes,” she says.

“The biggest surprise to me is the way I feel about myself. I’m more myself than I ever have been. It’s not so much that I worry about what other people think, but I’m just so ‘me.’ If I look back at the younger me and said ‘just be you for God’s sakes’...” Allison says.

“I’m happier now, I’m in better shape, and I have over 500 followers on LinkedIn! There are so many opportunities.”

Allison also enjoys being a part of work life, too. She enjoys interacting with people who come into the country club, even if it’s only one day a week now.

“Life is good in the fast lane,” Allison says, “I’m just trying to keep up!”

And just for fun, Allison excitedly reports that she’s recently submitted an Instagram selfie to enter an Estee Lauder contest. The prize is a free vacation. “With any luck, the next place I’ll be travelling to is Santorini!”

For Becky Behling, now 67, her 60s is only the start of what she calls the remaining third of her life.

In May of 2009, she decided to join a Feldenkrais Method Training Program as part of her long-term plan. “That presumption is based on the thought that I could live past age 90, or longer!” she says.

The Feldenkrais Method uses gentle movement and directed attention to help people learn new and more effective ways of living the life they want. For example, you’ll learn how to improve your range of motion, your flexibility, and your coordination with the idea that this will help improve your thinking, emotional regulation, and problem solving capabilities.

Allison graduated the training program at the age of 62.

“I have been so glad to have the amazing work of Moshe Feldenkrais to study and to teach to others. The method was crucial for pre and post-op pain and movement management for my dysfunctional hip joint and subsequent cascading effects.”

Here’s a video of Becky explaining how she helps people achieve similar relief.

Just last March of 2017, Becky had a right hip joint replacement due to advanced osteoarthritis, and her surgeon said she’d be back in 3 months to have her left joint replaced, too.

She set a date and even went in for her pre-op appointment, but she backed out at the last minute.

She explains, “The joint that was replaced last March caused chronic pain and disability. The left hip joint has not been anywhere near that level of dysfunction. I am glad I chose to wait.”

Since then, Becky’s been doing well with pain management, and she continues to focus on keeping active. “I lift heavy weights 1-2 times per week, I use the elliptical trainer and stationary bikes at the gym after yoga classes 2-3 times per week, and I walk or bike through my neighborhood as the weather allows.”

“Of course getting older creates physical changes that contribute to the decline of all systems,” says Becky.

For example, she no longer walks as fast as she used to. She used to set her treadmill at 4.0 mph, and she could walk at that pace for 30 minutes or more. Now, 3.2 mph is her limit.

But taking care of her well being and her health is and will continue to be one of her top priorities. She helps care for two of her young grandchildren, she teaches Feldenkrais lessons, she plans on fulfilling a lifelong desire to be fluent in Spanish, and she’s even taking Irish dancing lessons.

“The dance lessons help with strength, stamina, and the power of my hip joints. It’s also helping me to maintain agility and balance.”

Becky also fills her time by volunteering in Bible Study Fellowship International as a children’s leader. “This is something I have done for several years, and I find tremendous satisfaction in it,” she says.

Finally, Becky and her husband Dan are celebrating their 38th wedding anniversary. “I plan to do all I can to ensure our marriage is as dynamic and vibrant in its later years as it has been for the first 37 years.”